“Larry [Ridenour] was very instrumental in the ownership issues of this 43 miles. He said, ‘We’re going to get this money.’ And, the three counties – Allegheny, Westmoreland, and Fayette – all those counties have different, I’m going to say, resource potential. Some of them didn’t look at this as being that great of an opportunity. […] Larry and Malcolm [Sias], they spent a lot of time working with the counties trying to acquire the funding.”
–Jack Paulik, October 11, 2018[1] 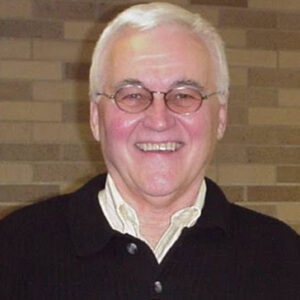 Larry Ridenour was an early leader in building the Yough River Trail North section of the Great Allegheny Passage (GAP), starting in the early 1990s. The Yough River Trail North was a collaboration between three counties, including Allegheny County, where Ridenour worked. He devoted part of his career to seeing the GAP become a reality, taking the lead on tasks ranging from land acquisition to trail advertising.

After attending a meeting with the Rails-to-Trails Conservancy in October of 1989, Ridenour became motivated to pursue the possibility of creating a trail from local railroad abandonments.[2] As a registered landscape architect, Ridenour had the technical skills to assist in designing the trail layout, including the trail construction and access area development. He worked with Dave Wright from the Allegheny County Engineering Department to form a trail from Ohiopyle to Pittsburgh and to build a trail from Connellsville to McKeesport.  Ridenour also had a hand in helping plan the development of the Eliza Furnace Trail, which runs along the Monongahela River and was built as part of former mayor Tom Murphy’s vision for a developed riverfront and pedestrian trail system in Pittsburgh.[3] Darla Cravotta, Former Neighborhood Policy Director for Murphy, fondly remembered Ridenour’s contributions to the Eliza Furnace Trail project and his reputation as a trailbuilder:

“[W]e hired a guy by the name of Larry Ridenour. And, Larry had worked for [the] Allegheny County Planning Department for a long time. He was kind of the Godfather of the idea of the Regional Trail Corporation. He was incredibly progressive.” [4]

Ridenour up to this point had begun creating a concept plan for the Montour Trail but wanted to expand south through the Pittsburgh & Lake Erie Railroad (P&LE) to Connellsville. Entrusting Wright to take on leading the Montour project, Ridenour shifted his focus more on what could be done with trailbulding opportunities in Westmoreland and Fayette counties.[5] The P&LE at this time between McKeesport and Connellsville was laying dormant due to the lack of coal industry in this area. Looking to sell, Gordon Neuenschwander, president of the P&LE, talked with RIdenour about the concept of a trail in the area:

“I went to Gordon Neuenshwander and had lunch with him over at Station Square. […] I sat down to lunch and said, ‘Gordon,’ and I laid it out for him. I said ‘Look at this. This is a fantastic opportunity.’ I said, ‘Give me a year to get the money and get political support and we’ll buy the [43 miles of right-of-way between McKeesport and Connellsville] from you.’”[6]

Neuenschwander, who had a previous working relationship with Ridenour who helped design his garden as a landscape architect, held onto the 58 miles of Montour right-of-way and 43 miles of the P&LE until Ridenour could get the money to buy and railbank the properties.[7] 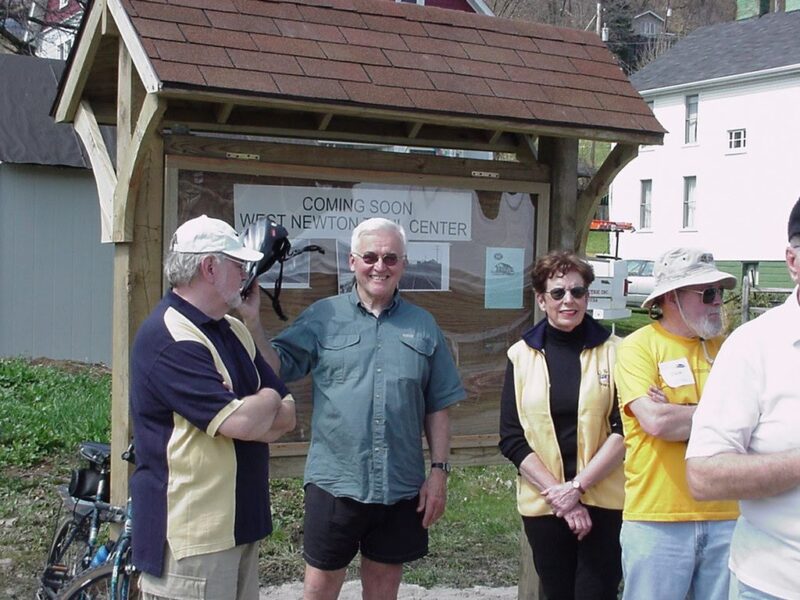 Ridenour was also one of twelve county employees and parks workers/engineers that began brainstorming ideas for a pedestrian trail (then dubbed the Yough River Trail North) that would wind through Allegheny, Westmoreland, and Fayette Counties in southwestern Pennsylvania. That same year during a separate meeting between county officials, town leaders, and interested volunteers, the idea to form a trail system along the P&LE Railroad became more concrete:

“We were talking about things that could be done to spur economic development in Southwestern PA. One of the guys there who I had never met before was Dave Tremba, who at that time, was the president of the Connellsville Chamber of Commerce. And, he started talking about the possibility of buying the P&LE [Pittsburgh and Lake Erie] railroad from McKeesport to Connellsville and connecting it to the little piece of trail that was built in Ohiopyle to create this great rail-trail. I mean, that was 43 miles of trail. So, if we connected, we’d have over 50. He told me that he was just contacted by Larry Ridenour who at that time was working in the Allegheny County Planning Department. He was contacted by Larry and Larry said he was trying to find interested people from each of the three counties: Allegheny, Westmoreland, and Fayette and wanted to put together a group, like a task force to begin pulling this thing together. So, I ended up calling Larry the next day after I returned from that meeting and he and I had a discussion and I told him we were very interested here at Westmoreland County Parks.”
-Malcolm Sias, July 31, 2019 [8]

Ridenour would formally propose a memorandum of understanding between these three counties in June of 1990 so that they could begin negotiations with the Pittsburgh & Lake Erie Railroad to purchase its recently abandoned tracks between Connellsville to McKeesport.[9] Ridenour and Malcolm Sias negotiated a purchase price for the right-of-way with P&LE president Gordon Neuenschwander based on appraisal of the property.[10] Ridenour recalls an interaction with Neuenschwander regarding the acquisition of the right-of-way:

“The Yough Trail was 45 miles and the Montour Trail was 55 miles. And, Gordon owned it all. And, I went to Gordon [Neuenschwander] and I said, ‘Gordon, I got a deal you can’t refuse,’ and I laid it out. And, I had a map and showed him on it. I said, ‘Just give me two years or a year, and I’ll get you the money to buy all of your right-of-way.’”[11] 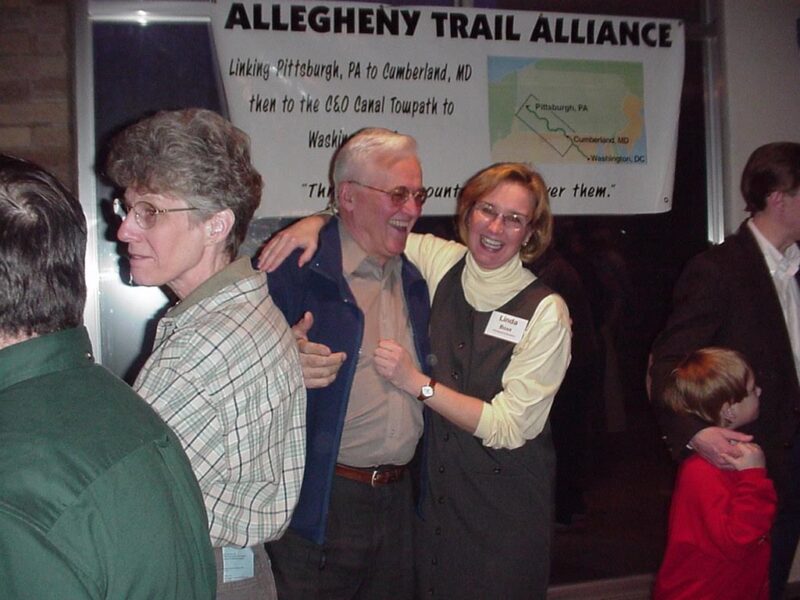 Ridenour with Linda M. Boxx at the Allegheny Trail Alliance retreat in 2004.

Ridenour was one of the principals responsible for coordinating the establishment of the Regional Trail Corporation (RTC), a nonprofit trail group that took ownership of the right-of-way and accepted the liability of constructing and maintaining the rail-trails.[12] Ridenour kept his word and on April 10, 1992, the RTC officially acquired 45 miles of the Youghiogheny branch and 55 miles of the Montour branch of the P&LE right-of-way for $214,000 dollars.[13] Because the RTC would shoulder the liability for the rail-trail, the county commissioners from Allegheny, Westmoreland, and Fayette Counties agreed to fund the project.

Bolstered by state and federal grants that matched Ridenour’s Allegheny County Planning budget of $30,000 dollars, trail development and planning progressed bit by bit.[14] Ridenour would often commit what he could from the Allegheny County Planning Commission in terms of funding for signage or trail advertisements. He utilized Allegheny County’s more robust financial position to provide Westmoreland and Fayette counties with the necessary support for project completion. Ridenour was fantastic at moving money around to best suit the needs of the trail.

“[Larry Ridenour] had a position, it was called a circuit rider position. They were statewide positions [funded by the PA Department of Conservation and Natural Resources] – people could apply for them. And so, he was working at Rivers of Steel and part of his job was to build the trail.”[17]

During the five years he worked for Rivers of Steel, US Steel offered trailbuilders the coke-gas pipeline property as a connection from Duquesne to Homestead. However, because of its industrial usage the property posed safety and environmental concerns. Ridenour managed the Phase I Environmental Assessment to inventory what needed to be cleaned up or filled in before construction/acquisition could proceed down the coke-gas pipeline.

But it’s probably one of the finest projects and its a legacy. It’s a neat thing about architects and landscape architects for the most part we deal in bricks and mortar and things like that. And, if it stands the test of time, it’s a true legacy.
Larry Ridenour, video interview with Paul g Wiegman October 2006

Ridenour’s contributions while working for Allegheny County and Rivers of Steel did not stop there. His concept plans would be implemented in future trail projects throughout the 2000s, most notably utilizing the Riverton Bridge to cross the Monongahela River to Duquesne.[18] Ridenour’s work on the Yough River Trail North, which later became the Connellsville to McKeesport section of the GAP, were essential to the completion of the 150-mile rail-trail. 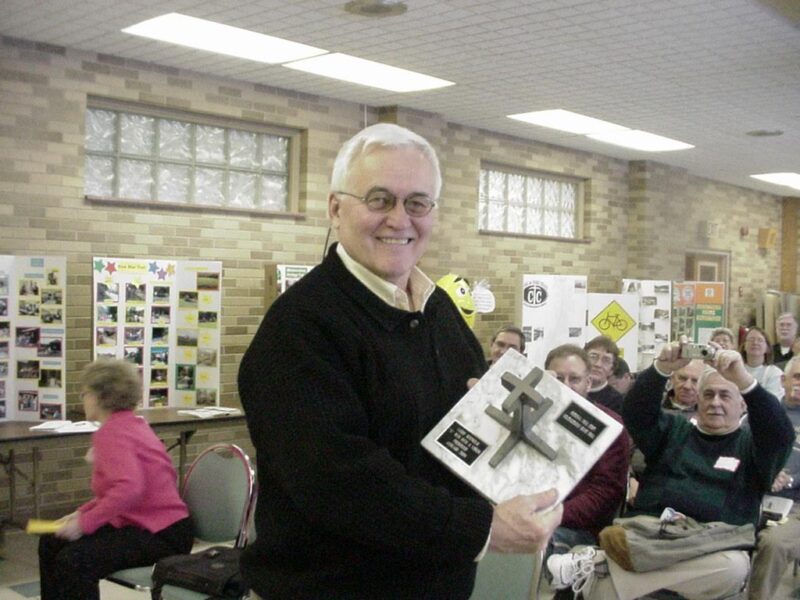 Ridenour claiming an award at the Allegheny Trail Alliance retreat in 2004.