“Well, one thing we learned on the GAP was we all helped each other. We had all these volunteer trail groups in different counties and we did almost all the bridges ourselves […] [E]very time there was a little bridge to do in Fayette County or no matter where it was – people converged from all over and got that bridge done. Everybody was working together and we were all committed to the overall concept.”
-Malcolm Sias, July 31, 2019[1] 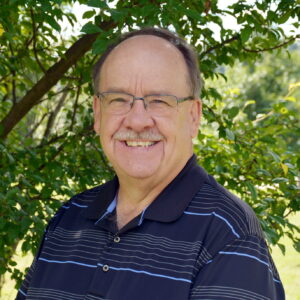 In 1989, Sias attended a regional meeting at the Westmoreland County Courthouse with staff members from other counties in southwestern Pennsylvania. The meeting’s purpose was to come up with ideas for how to best stimulate the region’s economic development.[4] Connellsville Chamber of Commerce President Dave Tremba put forward the idea of purchasing the Pittsburgh and Lake Erie Railroad (P&LE) right-of-way from McKeesport to Connellsville to those in attendance.[5] Interested, Sias called Larry Ridenour from the Allegheny County Planning Department. Ridenour was in the process of assembling a task force of interested representatives from the three counties of Allegheny, Westmoreland, and Fayette to develop the right-of-way of the P&LE.[6] Sias mentioned his county’s plans to develop Cedar Creek Park further towards the Youghiogheny riverbank, and the challenge they were facing in negotiating with P&LE for a railroad crossing over the portion of their tracks that ran through the park property.[7] Sias saw how Ridenour’s trail project and his own goals to obtain river access in Cedar Creek Park were mutually beneficial for developing their counties’ recreational resources. Sias became excited about the potential visitors a rail trail could bring to Cedar Creek Park.[8] 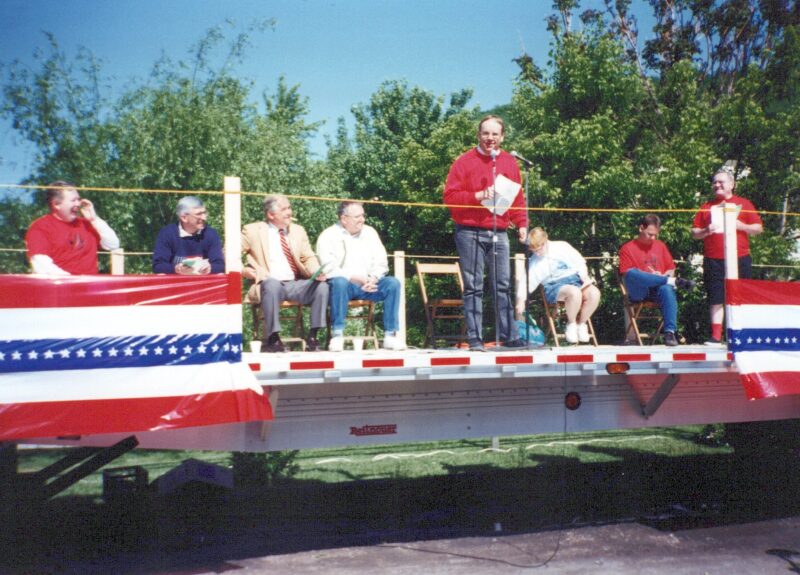 Sias speaking to the crowd at the West Newton trail opening in 1994.

Another meeting was held that same year at the Redevelopment Authority of Connellsville, with 20 representatives from Allegheny, Westmoreland, and Fayette Counties. The task force that was established at that meeting (a precursor to the Regional Trail Corporation) continued to meet consistently from 1989 to 1990 to discuss the needs and issues revolving around the development of a cross-county trail and how to keep it operational.[9] During this time, Sias and Ridenour were sent to talk with President of the P&LE Gordon Neuenschwander about the possibility of acquiring the right-of-way for the 43 miles of rail property between McKeesport and Connellsville.[10] Neuenschwander had already been considering abandoning the P&LE rail line between McKeesport and Connellsville since June 1989.[11] The official abandonment of the right-of-way took place the next year on May 31, 1990, giving Sias and his colleagues 180 days to purchase the property.[12] In 1991, the task force became the Regional Trail Corporation (RTC), an established 501(c)(3) nonprofit organization.[13] The entire purchase of the P&LE right-of-way came to approximately $230,000 dollars, and the deal closed in 1991.[14]

“[RTC is] a coordinating body that keeps it all working. But, it also just makes it so much easier. We’ve had groups come to us and say, “You know, you guys are really good at this. There’s this great opportunity. You’ve got to build this trail for us.” Well, it doesn’t work like that. It’s like, “You can associate with us. You build your trail; you bring your expertise, your membership, your energy, and you can take advantage of the tools in the box.”
-Malcolm Sias, July 31, 2019[15]

Sias’ day-to-day activities when it came to working on the trail were mostly administrative: filing paperwork and making calls to move the project forward.[16] Sias worked closely with the Planning Coordinator of Westmoreland County Parks, Jack Paulik, to plan the logistics of trail development in their county.[17] 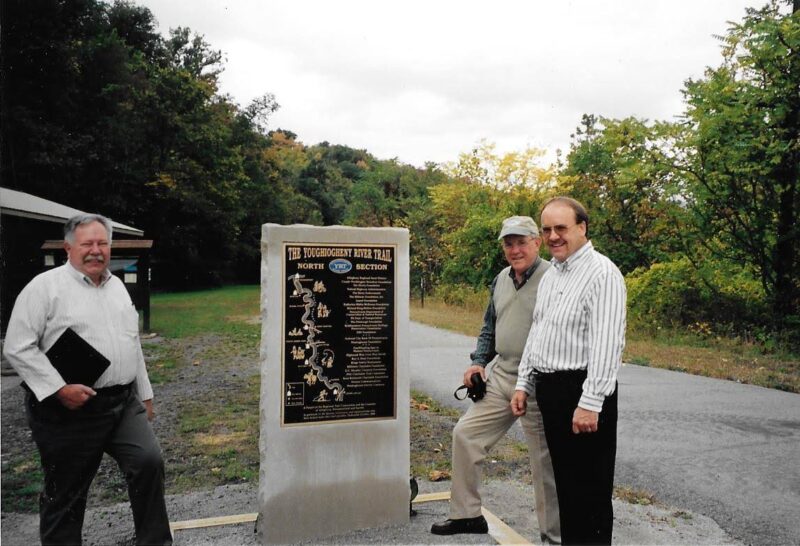 Sias (right) with Bob McKinley and Jim Linaberger at the Connellsville trailhead.

Sias served as president of the RTC on eight separate occasions between 1995 and 2020. He would be on the RTC board in some capacity or another for fifteen of the twenty years between 1991 and 2020.[18] During one of his terms as president, Sias negotiated with West Penn Power over the price of the company’s easement for the existing crossings where power lines went over the trail. Sias got them to agree on a one-time fee of $44,000 dollars for all crossings.[19] This fee was placed in an endowment for trail maintenance; since then, every time an easement holder has negotiated a one-time fee the funds have been placed in the endowment, which is almost $350,000 dollars currently.[20] 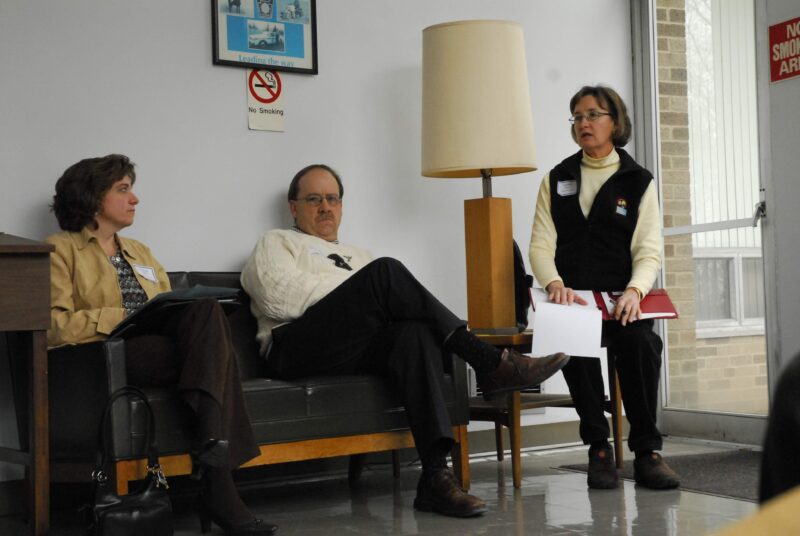 Sias at an Allegheny Trail Alliance Sign Summit meeting in 2008.

Sias also had a hand in bringing Linda M. Boxx onto the RTC board in 1994.  Boxx would be invaluable in helping raise money for the RTC, and would be a cornerstone in leading the Allegheny Trail Alliance (ATA) until the completion of the Great Allegheny Passage.[21] Sias was one of the trailbuilders present for the initial meeting when the idea arose of creating an organization that combined all of the trail groups working along the P&LE and Western Maryland right-of-ways so that they would have the best chance of raising funding for the trail’s development.[22]

RTC finished constructing their portion of the GAP in 1998. Sias continued developing trails in Westmoreland County, including the Five Star Trail, the Coal and Coke Trail, and the Westmoreland Heritage Trail.[24] Today, Sias continues to work with the RTC, other trail groups, counties, and municipalities to keep trail communities active in trail building and management.

“[I] think through the trails, probably the thing that benefited me the most were all the connections I made with people. […] I absolutely love the trail. And, I love all the trails I have been involved with over the years. I spend way more time working on trails than playing on them. […] Some of the best people I’ve met and the best friends I have are people that I’ve met through my trail associations and with the groups that I work with. One thing you’ll find- I tell people this all the time, is that the people who use trails are, for the most part, very good people.”
-Malcolm Sias, July 31, 2019[25]

Malcolm Sias, in more ways than one, has been a valuable asset to trail groups along the GAP and beyond. The RTC’s continued success is due in part to Sias’ dedication to building trails through inter-county cooperation. Without him, the RTC would not be as successful as a nonprofit as it is today.