“Engineers generally don’t work on trail projects, and I’m kind of a lone wolf doing that. When this first started as a concept, the engineers shied away. […] My boss, my director told me, ‘You shouldn’t be involved with this. You should stay in the mainstream,’ and I said, ‘Well, I like being where I am.’ ‘I think there’s good opportunity there [building trails for Allegheny County] and I get to be more independent that way.’ So, I’ve been able to be creative and independent by sticking with this non-mainstream project, and that’s a personal satisfaction.”
-Dave Wright, July 10, 2017[1]

While the Great Allegheny Passage (GAP) was being developed from McKeesport to Pittsburgh, involvement with Allegheny County became essential in terms of project mobility. Not all engineers and county managers saw the potential of the GAP as a valuable recreational asset but Dave Wright did. 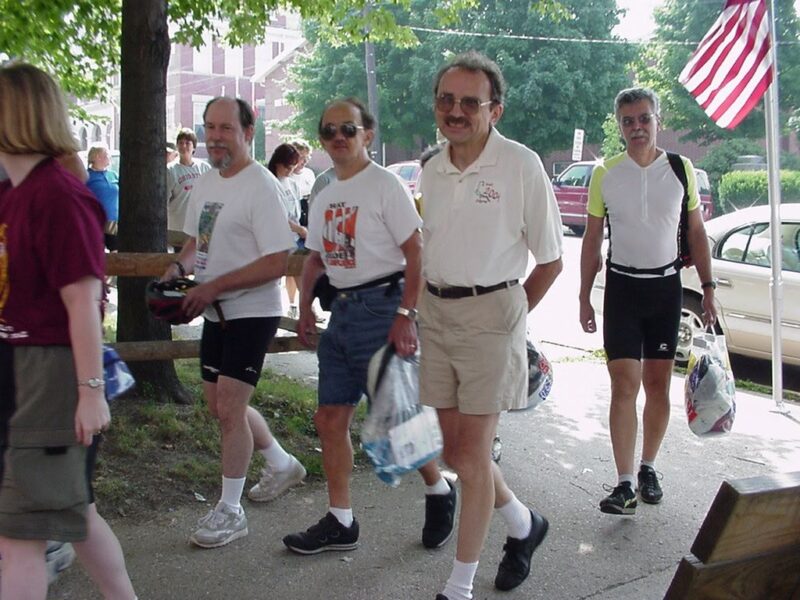 Wright was one of the engineers at the Allegheny County Department of Public Works who contributed to the construction of the 15-mile stretch between McKeesport and Point State Park. He began his trail involvement with the construction of the Montour Trail in the early 1990s, but was not brought onto the Great Allegheny Passage project until Allegheny Trail Alliance (ATA) President Linda M. Boxx needed county support.[2] Wright’s job as an engineer meant that he did not design or inspect construction of the various bridges and bypasses that dot the Homestead railyards and Waterfront. Rather, Wright served as a project manager. He oversaw various administrative tasks “behind-the-scenes” and brought requests for authorization to the Allegheny County Manager for approval to acquire property before construction could begin.[3] 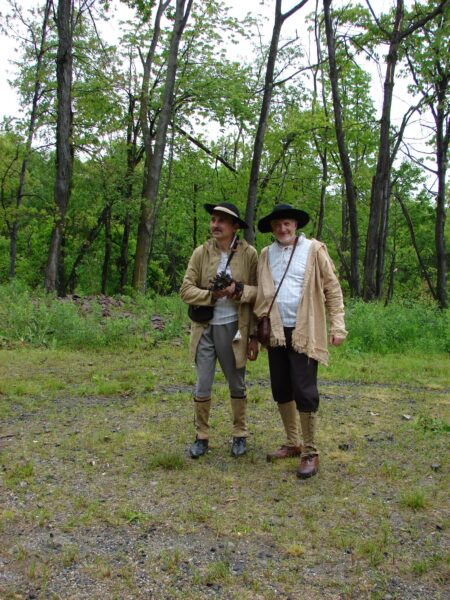 Wright (left) with Ned Williams, dressed as Mason and Dixon.

When the Riverton Bridge was donated to Allegheny County by U.S. Steel to allow the GAP to cross the Monongahela River from McKeesport to Duquesne, Allegheny County Deputy Director Don Killmeyer expressed some hesitation because a photograph appeared to show tilt in a pier. Although Wright assured county officials that the bridge had been inspected regularly by U.S. Steel, for good measure Bob Luffy from the American Bridge civil engineering firm was hired to assess a pier that seemed tilted. In reality, the meter level was slightly off due to a building error, which was repaired by the stonemasons as the pier was completed. Luffy, along with ATA Project Manager Jack Paulik gave the bridge a clean bill of safety and so Wright was able to help the county proceed with the acquisition.[4] Wright’s county office also accepted the deeds for the aerial easements for the Port Perry Crossing and Whitaker Bridges from both the Union Railroad and Norfolk Southern Railroad. This gave permission for both flyover bridges to be built over the still active rail lines.[5] Both structures were simultaneously placed on July 7th, 2010.[6]

“We were only limited to be able to have the span[s] lifted over the railroad on, I think, it was two weeks in the year, or may be one week. And, this was a week around the Independence Day weekend that the miners had off so that you wouldn’t have coal trains running through there. The stack [container] trains would still be running. […] [Fewer trains running could] open up a larger window of opportunity to place the span over the track. And, that’s what they did. In fact, they ran both the Whitaker Bridge and the Port Perry Bridge simultaneously; they had cranes at each site. And, the contractor placed both spans about 20 minutes apart…”
-Dave Wright, July 10, 2017[7]

Wright states that his mantra for working with landowners to acquire land to build upon is to be “persistent and respectful” in making deals.[8] After the gaps in the GAP were successfully bridged to Pittsburgh in 2013, Wright continued his work with Allegheny County as a project manager. His insight into the various development projects between McKeesport and Homestead helped to make the GAP what it is today.

[1] Dave Wright (Lead Engineer for Allegheny County, Personal interview about his role in overseeing the engineering work on the GAP in the county, particularly around Duquesne and Homestead), interviewed by Eric Lidji, Pittsburgh, PA, July 10th, 2017.  Transcript: “2017-07-10 Dave Wright_Final.pdf,” 26.