“When I took the position, I really didn’t think there [were] a lot of acquisitions involved on my part. But, I very quickly found out that was a big, big part of what I was going to be doing. And, what it was, was negotiating deals with railroads, private businesses, and municipalities to close this gap. So, that was, at some point, I thought the most daunting part of this project – was getting the real estate.”
-Jack Paulik, May 9th, 2019[1] 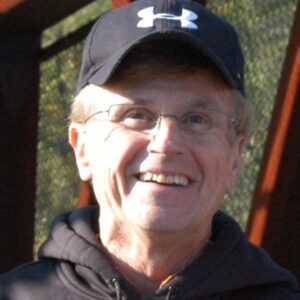 Over the nearly 20 years of trailbuilding from the Regional Trail Corporation’s (RTC) formation to the “Point Made!” celebration on June 15, 2013 in Pittsburgh, John “Jack” Paulik observed his share of trailbuilding peaks and pitfalls. An avid biker, park and trail developer, and certified forester, Paulik’s contributions to the Great Allegheny Passage (GAP) and the recreational resources of Westmoreland County greatly improved access to these treasures. Paulik made possible many of the amenities along the Yough River Trail North and the final 9 miles into Pittsburgh.

Paulik began his career with the Westmoreland County Parks Department a few years after graduating college in 1974.[2] During his 30 years of service to the county he supervised park development, managing projects that ranged from digging out man-made lakes to heading an initiative to make all Westmoreland parks handicap accessible.[3] Other important aspects of Paulik’s position were soliciting grants and building many of the assets in the county’s parks.

“I was responsible for soliciting grants. I would solicit grants for all of our park development. And, over half the time, I would not hire a consultant to do a design for me. I would actually, through a lot of skill levels, practice, and research, I would develop the contracts, I would do the [engineering] for the projects, put it together right to specifications, bid the projects and oversee the construction. So, I did every phase from thinking [about] what the project is to the completion of the project.”[4]
-Jack Paulik, May 9th, 2019

During Paulik’s time working with Westmoreland County Parks, he tackled the expansion of Cedar Creek Park to the Youghiogheny riverfront, which was cut off from the park by the Pittsburgh and Lake Erie (P&LE) railroad until the line’s abandonment in the late 1980s.[5] This hindrance was mostly due to the cost of adding a signal crossing, an ill-advised expense considering that the railroad was in decline. When the P&LE finally abandoned the rails – allowing visitors to safely move from the park down to the waterfront – 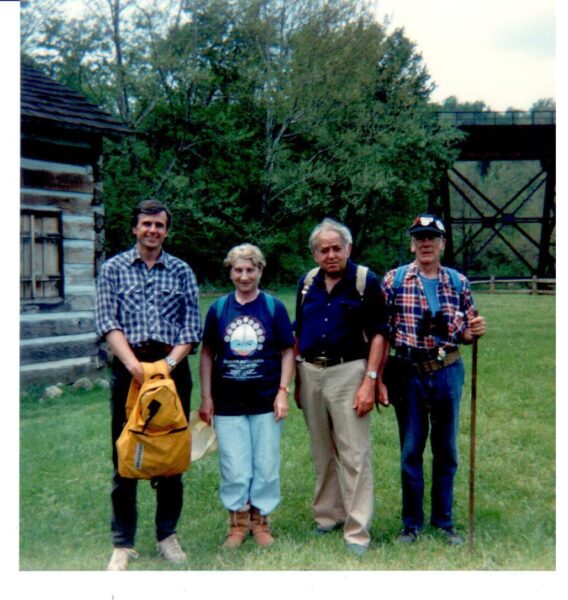 Paulik (left) with Hugi Koudela & other assessment crew in 1989.

Paulik and his colleagues, including Malcolm Sias, were finally able to build structures like access ramps to the Youghiogheny River and restroom facilities. These were funded by a state grant from PA State Representative James J. Manderino.[6]

With Cedar Creek Park’s river access completed, the idea arose to build a bike trail on the P&LE right-of-way through the park. Dave Tremba of the Connellsville Chamber of Commerce and Allegheny County Planning Director Larry Ridenour convened a meeting of county representatives and park affiliates in Connellsville in 1989 to discuss economic opportunities or initiatives that Allegheny, Westmoreland, and Fayette counties could implement.[7] Paulik, along with Ethel “Hugi” Koudela of the state’s Department of Community Affairs and Larry Ridenour, participated in a feasibility study administered by the National Parks Service (NPS) in 1989 to explore the viability of a pedestrian trail along the P&LE abandonment.[8] Paulik explains what the feasibility study covered and how he and Koudela completed the study:

“We would meet, we would put cars, say, six miles apart to trail locations. And then, we did this pre-vegetation. We did it, like, in March and April. […] So, as we walked the corridor, we were looking at the drainage system, if it was satisfactory. How, the trail corridor was, if the ties were still there. […] [W]e measured the width, we wanted to see if we had enough ballast for base to build a trail and what kind of issues there were with property owners. And, damage to the trail from just laying idle for a long time, a lot of washouts. We cataloged all that information and took it back and submitted that report to [the National] Park Service.”[9]

The county representatives and committee volunteers would eventually evolved into the Regional Trail Corporation established as an official 501(c)(3) nonprofit organization in 1991 around the same time Allegheny, Westmoreland, and Fayette counties purchased the 43 miles of P&LE right-of-way between McKeesport and Connellsville.[10] Paulik served as the construction chair on the RTC board with Ridenour, and engaged Pittsburgh landscape architecture firm GWS&M to design all 43 miles of the Yough River Trail North. Trailbuilders completed the first 2.5-mile section between Adelaide and Dawson, Pennsylvania in 1993.[11] Another 6 miles between Greenock and Buena Vista were also developed in 1993 as a “proof of concept” to gain positive support from the public in each county.[12] During development and construction in the mid-1990s, Paulik acted as a representative of RTC, rather than only affiliating with Westmoreland County.[13] 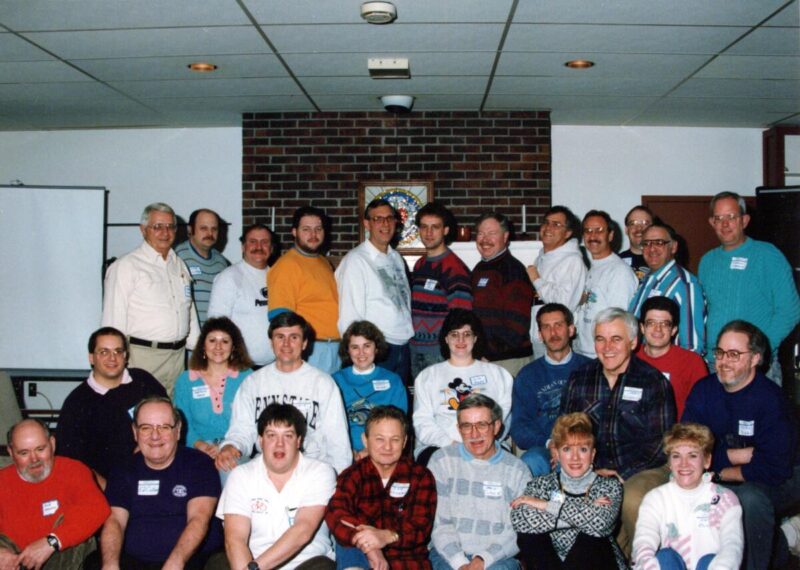 One of the most important factors contributing to the successful development of the Yough River Trail North during Paulik’s tenure as construction manager was the involvement of volunteer trail groups. Paulik elaborates on their important role in the trail’s construction between 1993 and 1995:

“The trail chapters – initially, there were three or four – one in each county. And, they were great because that’s why the state looks at the Regional Trail Corporation as being this very successful organization because it had trail chapters that were doers. And, what I found in the trail building world…is that when the grassroot level engages, these trail chapters help build this trail, they helped raise money, they built bridges, they remove[d] debris. Then their tie into maintaining this trail is like, ‘This is ours.’ […] These volunteers- because I worked in the county at the time, I would call in these volunteers before I would call on county people. […] I enjoyed working with them because their attitudes were great.”[14]

Besides a few hiccups dealing with encroachment on the right-of-way, Paulik saw the completion of the 43 miles of the Yough River Trail North through until the end, finishing up the final section between McKeesport and Connellsville in 2000.[15] However, the real challenge was yet to come.

After nearly 30 years of service to Westmoreland County, Paulik retired in 2005 and looked for different avenues to best use his talents.[16] Still on the RTC board, Paulik noticed the difficulties the Steel Valley Trail Council (SVTC) was having in securing the “gaps in the GAP,” the final 9 miles from McKeesport to Point State Park. Allegheny Trail Alliance (ATA) President Linda M. Boxx asked Paulik to be the ATA Project Manager within Allegheny County in 2006.[17]

“I really did not know what I was getting into, it was much, much more involved than I ever thought and I think the biggest surprise component was between McKeesport and the City of Pittsburgh, which is approximately between nine and ten miles. The alignment goes through old industrial sites and none of that property had been acquired up until [2006]. That was my biggest surprise. I thought, ‘I can build [a] trail almost anywhere because I have a lot of experience,’ but I can’t build [a] trail until I get something to build it on. And, the biggest challenge was acquiring the properties through easements and acquisitions through a multitude of resources over a lot of time – very frustrating in some areas and quite rewarding in others.”
-Jack Paulik, June 26, 2019[18] 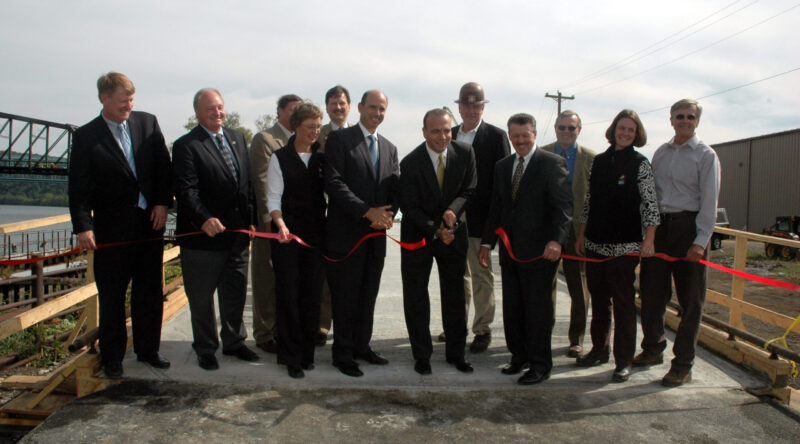 One of Paulik’s first projects would be assisting SVTC President Hannah Hardy with the negotiations and subsequent development of the coke-gas pipeline property bordering Kennywood Park in West Mifflin, Pennsylvania.[19] For several years, the 2-mile stretch of property was discussed, but little action was taken to actually acquire the property. Finally, in late 2006, with the assistance of state grants (several from DCNR) to buy the property, the coke-gas pipeline finally came under ATA/RTC ownership.[20] To Paulik, this was the start of connecting the remaining 7 miles from McKeesport to Pittsburgh.[21] 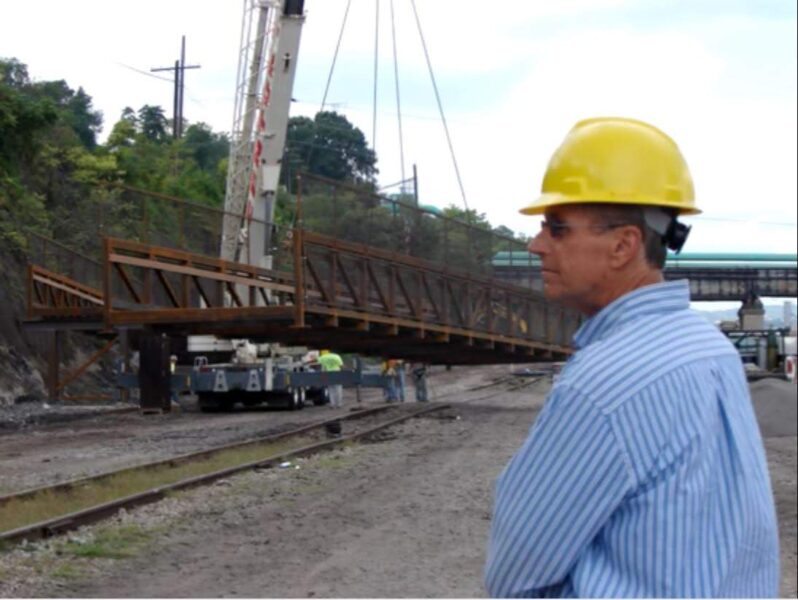 Paulik during the Port Perry Bridge installation in 2010.

Paulik also helped to secure and/or build other trail alignments and areas for the GAP:

One of the most challenging sections for Paulik and fellow trailbuilders to secure was the Keystone Iron & Metals and Sandcastle properties. Both properties’ landowners resisted a pedestrian trail, as did municipalities who prioritized private development during the late 2000s and early 2010s.

“[T]he municipalities – Homestead, West Homestead, Munhall, Whitaker…[even] back to McKeesport and Duquesne – none of those municipalities made the trails a priority: it was private development. So, when you finally got to, ‘Oh, the trail is important,’ they used the real estate for commercial development. So, we had the tare of what existed. And then, it gets tough. Then we hit Sandcastle and Keystone Metal. Sandcastle – very impassable because the owners were not willing to work at all with us. They’re an amusement park that doesn’t see the benefit of a recreational trail. And, the county and us beat our heads against the wall trying to get any type of alignment through or around Sandcastle. It seemed like it just wasn’t going to happen. And, the eventual alignment – the county put a lot of pressure, time, energy, and funds into acquiring that right-of-way through Sandcastle. 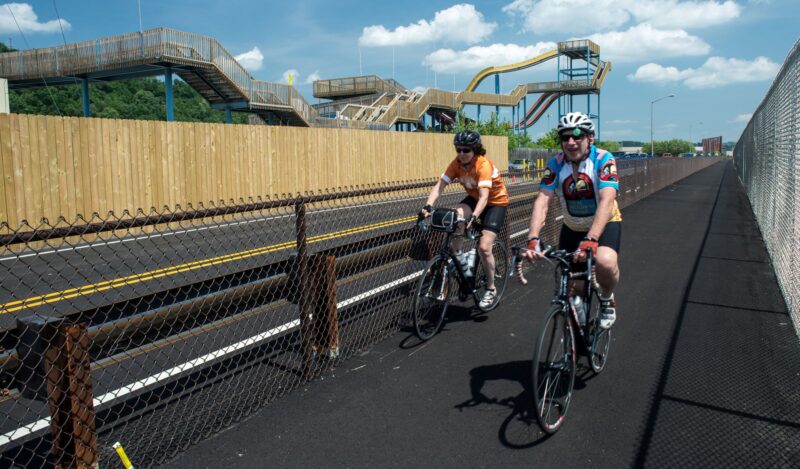 And then, we ended up at Baldwin and the Keystone Metals’ property, which was extremely sensitive too- that was the final connection to get through Keystone Iron and Metals to make the connection to the Pittsburgh Friends of the Riverfront Trail. […] [W]hen it was turned over, the county had an involvement in that property. They had the say-so on the final sale of that property, and they talked to the owner of Keystone Metals, and they agreed to allow an easement through their property in some way if Sandcastle would allow the trail through theirs…”
-Jack Paulik, June 26, 2019[22] 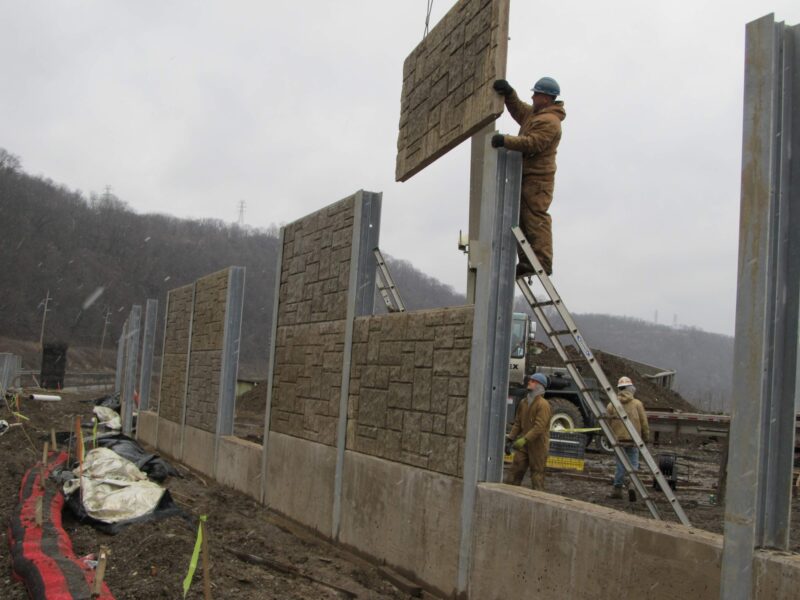 2013 Building the “Great Wall” at the Keystone Metals property.

Fortunately, through factors outside of the control of Paulik and the trailbuilders, Sandcastle loosened its grip and provided an easement through park property; in turn, Keystone Metals honored their agreement. Through cooperation and friendly negotiations with the Keystone Metals owner Vinnie Thompson, Paulik devised a land swap for a trail easement across Keystone Metals property.[23] As a safety precaution, a 2,000-foot “great wall” was erected between trail property and Keystone Metals at a cost of $1,000 a foot.[24] This final development helped to secure a continuous 150 miles of the GAP in 2013.

Paulik completed Sandcastle and Keystone Metals sections and “retired” for a second time in 2013. 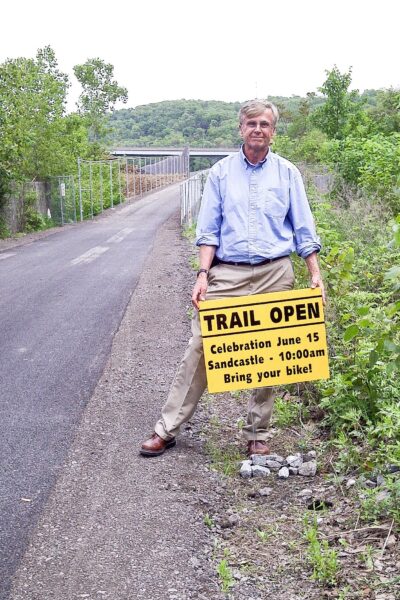 It too, was short-lived. Paulik was once again called out of retirement to assist Somerset County Trail Coordinator Brett Hollern in reconstructing the Pinkerton Tunnel.[25] 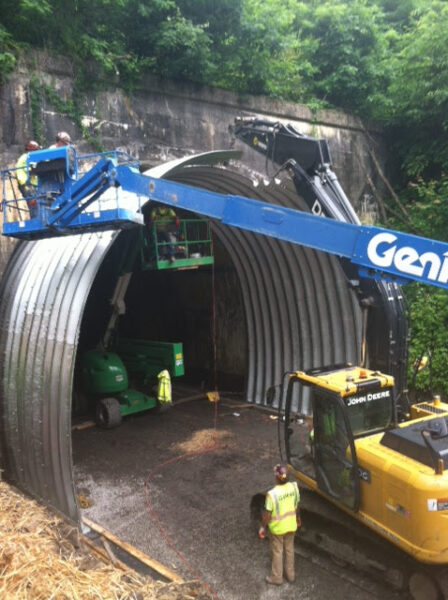 The long-awaited tunnel rehabilitation project was completed in 2015, after an initial, unsuccessful attempt in 1994.[26]

Jack Paulik’s ingenuity, ability to forge partnerships, and determination when tackling the on-the-ground problems was invaluable and essential to the completion of the GAP. Paulik could not have done it alone, but neither could the RTC or the ATA have met their trailbuilding goals without Paulik. The former ATA project manager continues to be a representative of RTC on the ATA Board of Directors and to offer his experience and time to address trail-related needs and management issues along the Great Allegheny Passage.

Paulik came out of “retirement” for the third time to help Linda Boxx develop an assessment tool for the National Park Service’s C&O Canal Towpath resurfacing project. The assessment was funded by the ATA’s TrailGuide Grant Fund and helped determine the aims of the C&O’s resurfacing project. Paulik now serves as the project manager and is working with NPS leaders to develop a plan of action to implement the resurfacing project in the most feasible way possible.