“[W]e’ve worked with a lot of clients and I never worked for a client I didn’t believe in. But, the trail people were really committed in a different way. People we don’t get to see every[day], you know – we mostly see boards and not the volunteers of these different groups […] There’s not one person I met on the trail that I don’t like.”
-Sandra Finley, May 23, 2019[1] 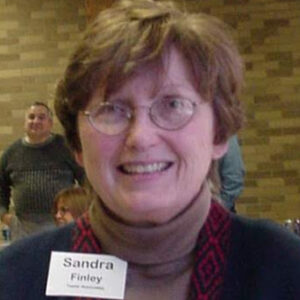 From the very beginning of the Great Allegheny Passage’s development, Sandra Finley was an instant supporter. The completion of the 9.5-mile rail conversion within Ohiopyle State Park in 1986 sold her on the idea of a trail along the P&LE and Western Maryland Railway right-of-ways.[2]

In 1985, Finley answered an ad in the paper to be a research-writer for Bob Teeter and his newly formed business, Teeter Associates.[3] In a lucky coincidence, the Regional Trail Corporation (RTC) hired Teeter Associates in 1992 to raise private funding to build the Youghiogheny River Trail North from McKeesport to Connellsville, eventually expanding the scope to connect Pittsburgh to Cumberland as one consecutive rail trail.[4] 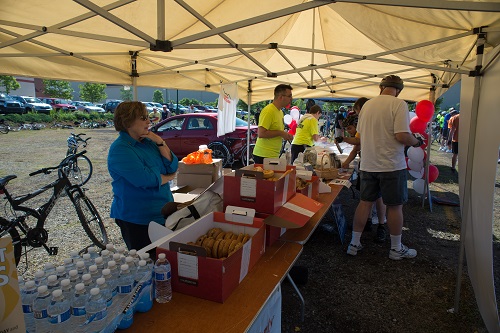 Finley, operating the snack table during the Point Made! ceremony in Pittsburgh.

Finley worked diligently with the RTC, using the resources of Teeter Associates to write an implementation plan with Teeter and Linda M. Boxx in 1994 that combined all the needs of the seven individual trail groups under RTC’s umbrella into one comprehensive building/funding strategy.[5] This consolidation of trail group proposals simplified the RTC’s pitch and made private fundraising easier. Interested foundations could clearly see how the trail would be completed, and they began to make grants to construct the trail. The implementation plan that Finley and her colleagues presented to foundations raised millions in private funding that, in turn, lent the Allegheny Trail Alliance (ATA) and RTC credibility and also enabled the trail to accept more public funding because they had private funds to match what was needed for trail development.[6]

“Our role in terms of getting the materials organized, getting the meetings planned, writing up the background, keeping the documents, all that kind of stuff […] Sandra coordinated most of the daily activity for many years. She was extremely committed and always did very good work and much above and beyond the normal.”
-Bob Teeter, May 23, 2019[10] 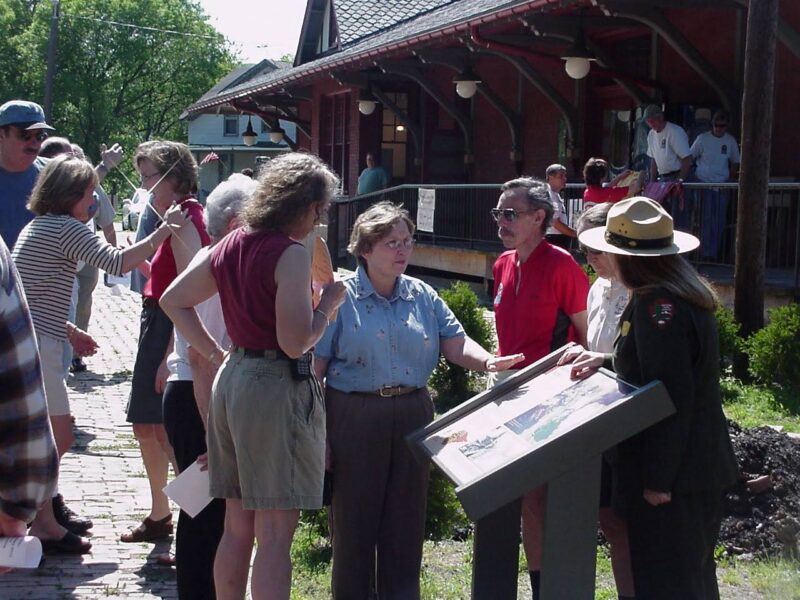 Sandra with NPS and ATA members at the 2002 National Trails Day event.

One of Finley’s major contributions to the GAP was her work with the National Park Service, Potomac Heritage National Scenic Trail representative Don Briggs, and Boxx to create a historic interpretation plan.[11] Finley’s goal was to showcase the rich history of the region through the GAP, including historical figures such as George Washington and places like the old steel mills and coal mines that dotted the Pennsylvanian/Maryland countryside.[12] The project started with interpretive signs providing specific historic information about the surrounding area, giving trail users a chance to learn the context of the railroad bed they walked or rode upon, as well as the history of specific structures along the trail.[13]

“[W]e did so much research. We read every book that was on the Mason-Dixon Line, [Linda Boxx] and I did. We went to meetings of the Mason-Dixon Society. And, what ended up, the stone blocks that spell out Mason-Dixon – that’s a photo op you’ll see everywhere. Now, you used to see the photo op of one foot in Maryland and one foot in Pennsylvania before we put the installation up. But, that’s a good place to stop and visit. And then, the Mason-Dixon Line had all the markers, you know, M&P, it was the Calverts in Maryland – Penns, P for Penn. And so, we had an obelisk made because at that point, there had been some obelisks along it at one point and most of them are gone now. Along the Mason-Dixon Line, Mason and Dixon placed the stones but later, decorative obelisks were erected. So, that was a lot of fun. And, a lot of people got interested in that one.”
-Sandra Finley, May 23, 2019[14] 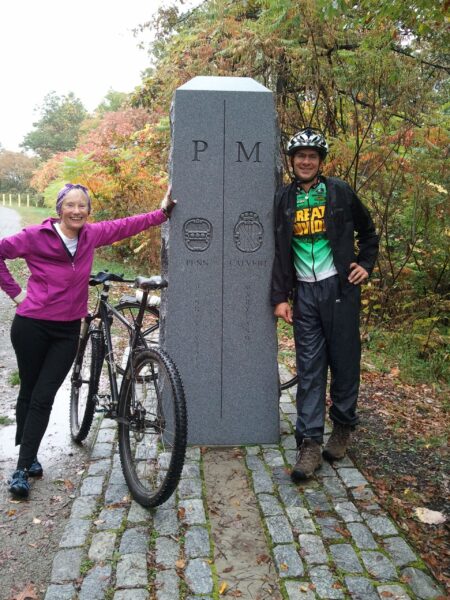 ATA Board members June & Seth at the Mason & Dixon Line. 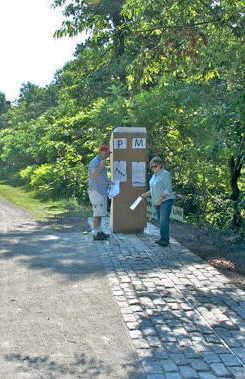 Finley didn’t stop there when it came to historical interpretation along the trail. With some money leftover from the interpretive sign project, Finley and Boxx went to work creating an interpretive monument at the Mason-Dixon Line.[15] Developing the monument took about a year, and was completed in 2015.[16] The attention to detail Finley gave to the Mason-Dixon Line monument and the interpretive signs as a passionate and avid historian now allow trail users to really dive deep into the history along the trail. Finley continues to volunteer her time along the trail counting trail users and still contributes as a GAP historian.[17] Thanks to her hard work and passion for history along the GAP, thousands of trail users each year can enjoy the trail from Pittsburgh to Cumberland, Maryland while learning the context of the region along the way.

[1] Sandra Finley, (Employee of Teeter Associates, Interview with Bob Teeter about consulting made with the ATA), interviewed by Avigail Oren, Greensburg, PA, May 23rd, 2019. Transcript: “Bob Teeter and Sandra Finley_Final,” 28.