“I don’t know how the idea originated. It started with the conservancy and probably had to start with either John [Oliver] or me. But I can’t tell you who was the genius behind the whole thing. I think the idea of a linear section of land was always appealing to us, though, because obviously, you know, it could become a trail. And trails were important items in our lives because [they] gave access to lands. And I should add that such access was extremely important to all of us. To borrow a word from the Sierra Club book, if you can see the wonders of the wild land, then you can be persuaded to help protect it. But if you don’t see it, you don’t understand what’s there. And hence, you have no idea why it might be worth saving.”
– Joshua Whetzel, May 2005[1]

When the Western Pennsylvania Conservancy (WPC) in 1973 learned of a proposal to abandon the Western Maryland Railway from Connellsville, Pennsylvania to Cumberland, Maryland,[2] WPC president Joshua Whetzel was presented with an opportunity to repurpose the railroad line as a hiking and biking trail and continue the organization’s mission of preserving Western Pennsylvania’s natural lands. His work in acquiring the first miles of railbed would ultimately achieve the goal of connecting Pittsburgh to Washington D.C. via recreational trail, although it took several decades of work by numerous people.

The seeds of the Great Allegheny Passage perhaps germinated during Whetzel’s time in Washington D.C. as treasurer of the Conservation Foundation,[3] when he spent time walking along the historic Chesapeake & Ohio Canal towpath.[4] Years later he would acknowledge that, “the fact that a trail existed through that busy little part of Washington called Georgetown that had historical significance and went along the Potomac” influenced the idea that a comparable rails-to-trails initiative in Western Pennsylvania could be launched.[5] 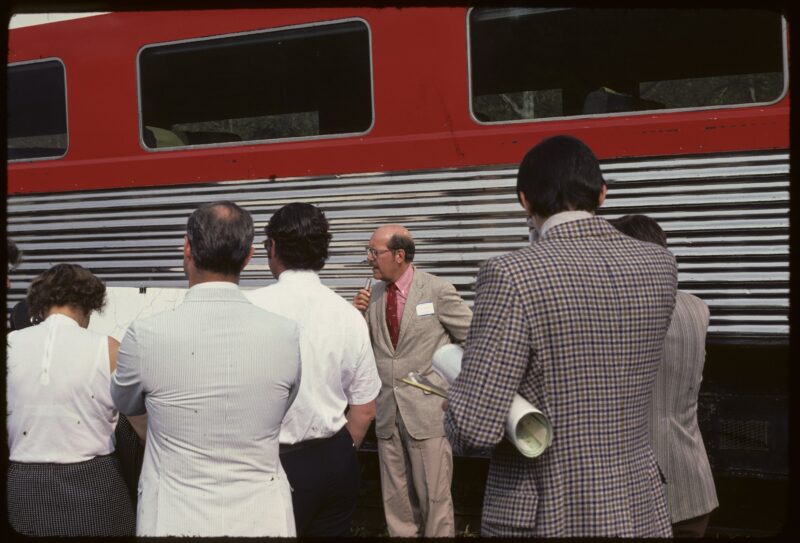 Josh Whetzel (center), giving a speech to onlookers at the Bowest Railyards as part of the 1975 “Last Ride” festivities.

A year later, in 1969, Whetzel returned to Pennsylvania to begin a decade-long tenure as WPC president, during which he led the organization in significant conservation and recreation initiatives, including the beginnings of what would become the Great Allegheny Passage.  In October 1973, Whetzel and WPC director of land operations John Oliver met with Western Maryland, Baltimore and Ohio Railroad and Chessie System executives and counsel in Baltimore, Maryland to discuss the potential railroad abandonment.[6] It took two years for the Interstate Commerce Commission to approve the petition[7] and another three years for the Chessie System and the Western Pennsylvania Conservancy to reach a charitable deal for the nearly 27 miles of railroad right-of-way.[8] Despite lack of support from the governor and the Commonwealth of Pennsylvania – which had protested the abandonment[9] – Whetzel and the WPC pressed on. At the Western Maryland Railway’s suggestion, the WPC organized a special passenger train ride on the railroad as a media event to win support for the recreational trail.[10] After his tenure as WPC president ended in 1978, Whetzel continued as board chairman until 1995.

[7] The initial decision granting the Western Maryland Railway abandonment order, Docket No. AB-69 (Sub-No. 1) was issued by Administrative Law Judge William G. Spruill on February 14, 1975 and served to all parties involved on February 19, 1975. A copy of the decision is included in a letter from Richard Allen, General Attorney, Chessie System to John C. Oliver, III, Director of Land Operations, Western Pennsylvania Conservancy, February 20, 1975.