“…We knew the greater long-term benefit was the expansion of the trail east and west. We just took a segment that we could afford in the park. But, we knew, hopefully, someone would be able to take it and expand it west toward Pittsburgh and east toward      Cumberland and eventually hooking up with the C&O Canal to take it all the way into Washington, D.C.”
– John Oliver, July 25, 2003[1] 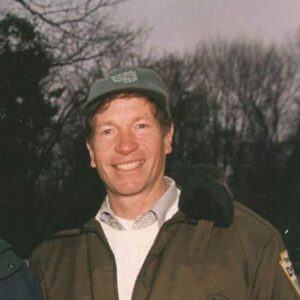 When he joined the Western Pennsylvania Conservancy (WPC) in 1970, John Oliver brought with him a zeal for outdoor recreation that would guide his 25-year career with the organization. The WPC’s director of land operations grew up in Western Pennsylvania and enjoyed many sports that the region had to offer, from hunting and fishing to camping and canoeing.[2] His passions would naturally align with a pioneering hiking and biking trail through the heart of Ohiopyle State Park. 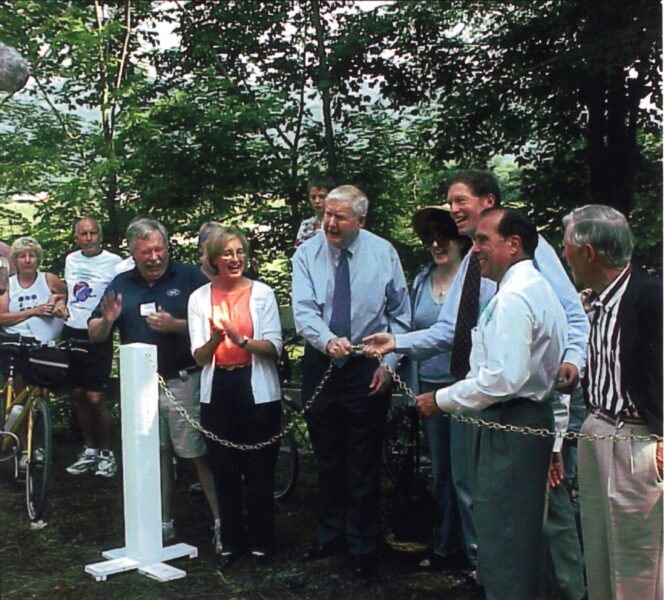 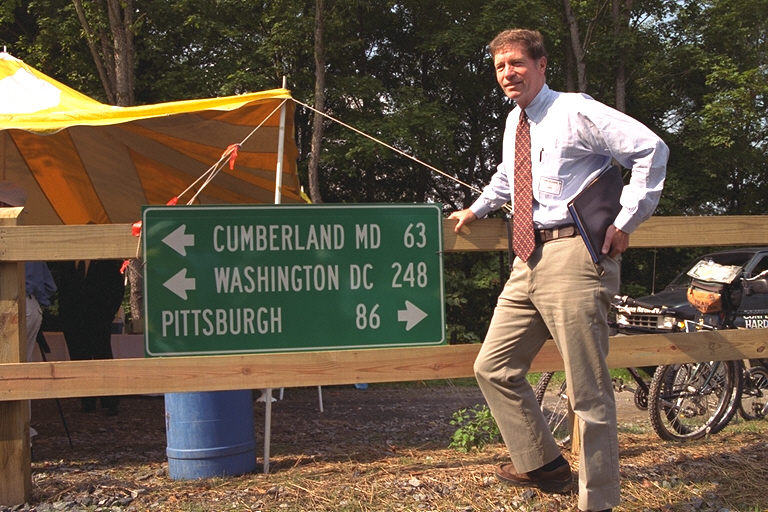 John Oliver posing with a trail sign near Confluence during the 100-Mile Celebration.

As a likeminded partner to WPC President Joshua Whetzel, Oliver was integral in the early discussions with Chessie System executives about the pending abandonment of the Western Maryland Railway and its adaptive reuse as a recreational trail.[3] During negotiations to acquire the initial 27-mile portion of the railroad’s right-of-way,[4] Oliver worked with Director of Land Acquisitions Anthony “Tony” Suppa, who was responsible for high-level land title analysis, plus Port Authority of Allegheny County attorney Bob McKenzie, a right-of-way expert, to determine the ownership of the railroad corridor.[5]

Oliver succeeded Whetzel as WPC president in 1978. He handled the title transfer of the initial 17 miles of the conservancy’s Western Maryland acquisition to the Pennsylvania Department of Environmental Resources,[6] working with Chief of the Land Records Section John Rex and Pennsylvania Bureau of State Parks Secretary Maurice Goddard.[7] Oliver was also involved with extending the Ohiopyle State Park boundary from Ramcat Hollow to Confluence.[8] 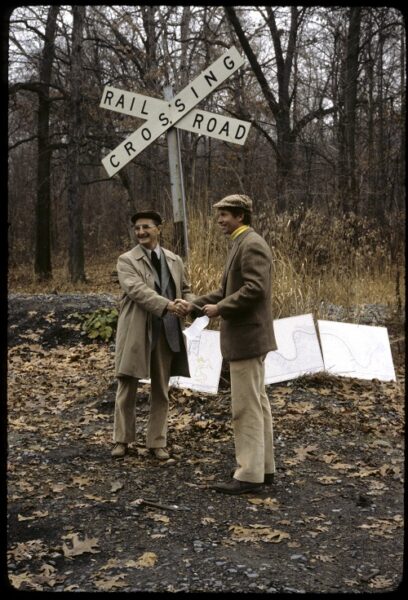 Despite the challenges of deciphering the ownership of the railroad right-of-way, limiting the initial scope of the project due to bridge and tunnel liability,[9] and piecing together separate segments over time, Oliver recognized the potential for the trail to connect Pittsburgh to Washington D.C.[10]

Oliver continued as WPC president until 1995, when he was appointed as the first secretary of the new Pennsylvania Department of Conservation and Natural Resources.[11] Here, his position was invaluable to the success of the trail, working with Allegheny Trail Alliance president Linda McKenna Boxx on more complex infrastructure along the Great Allegheny Passage, including renovating the Big Savage Tunnel.

“The stars were aligned. We took advantage of it and ran with it, and the result is – I keep telling everybody, I’ve had an opportunity to go all over the world. And, almost every place that has a significant rail-trail – certainly in the United States – and there’s nothing like the GAP.”
– John Oliver, February 27, 2018.[12]

[4] Although the Chessie System was willing to transfer the entire Western Maryland Railways right-of-way to the Western Pennsylvania Conservancy (WPC), the WPC and the Commonwealth determined that the potential expenses in assuming the liability for the major infrastructure along the route were too great at the time. The WPC purchased 26.75 miles of the Western Maryland right-of-way from the Chessie System on June 9, 1978 – Fayette County Recorder of Deeds, Deed Book Vol. 1238, Pages 68-73. – https://pa.uslandrecords.com/palr2/PalrApp/index.jsp.

[9]“We said we simply could not assume responsibility for the liability associated with the bridges, the viaducts and tunnels and all the structures associates with it. So, we want to concentrate only on the 25 miles along the Youghiogheny River within Ohiopyle State Park.” – John Oliver. Paul g Wiegman interview with John C. Oliver III, May 2005.