“Shortly after we started, we decided to hire a trail manager and the person we chose was Robert ‘Bob’ McKinley. Larry Ridenour and I, plus two or three others were involved in the interview process. We interviewed a bunch of different people. We were looking for a trail manager, which at that point, there was no such thing as a trail manager. 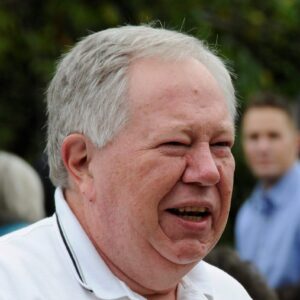 […] But, we ended up hiring Bob McKinley and I remember that he had this extremely strong community service background. […] And, you could tell that he was just one of these people that when he talked about stuff, he got you excited about it. And, that was his strength with the Regional Trail Corporation. He was actually very good. He was going out and talking to those people who are afraid of the trail and with those communities that weren’t sure that they wanted [the] trail to come through. He would go out and talk to them about all the good things that the trail could bring. And, he could do it in a way that they felt comfortable with it, you know what I mean? He really helped to win them over rather than pushing them further away.”
–Malcolm Sias, October 14, 2019[1]

To manage the ever-changing job that is trail development is already a challenge in itself. To have a manager be as committed to the community as he is to the trail project he works on is what made Robert “Bob” McKinley so invaluable to the Regional Trail Corporation (RTC). McKinley was extremely passionate about the trail project and succeeded in bridging the gap between skeptical members of trailside communities and trail advocates within the organization. 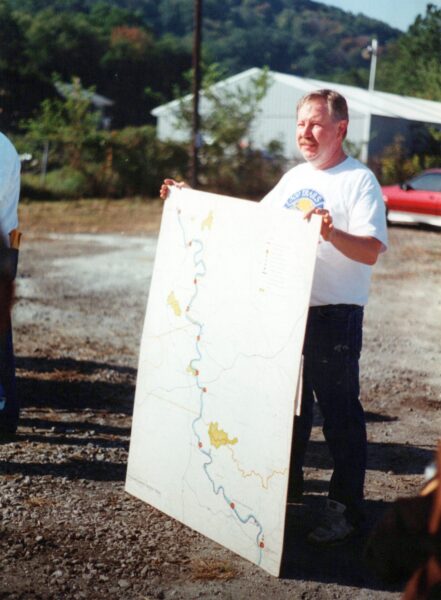 McKinley with a map of the proposed route of the Yough River Trail North, 1992.

McKinley began his trail involvement in 1992, a year after the RTC was formed as a standalone 501(c)(3).[2] Mckinley was hired to be a more “boots on the ground” presence for the members of RTC to better oversee the completion of the Yough River Trail North (YRTN) project.[3]

McKinley would become Trail Manager of RTC from the latter half of 1992 to 2004, spearheading the effort to establish the 43 miles of consecutive trail between McKeesport and Connellsville from an administrative capacity.[4] McKinley aided the RTC in writing grants to the Pennsylvania Department of Conservation and National Resources (DCNR) to help fund the construction of the West Newton Station, which took two separate building phases as the grants were released to the RTC.[5]

“[Bob’s] great spirit moved others to join in and take ownership of their trail segments. He was an inspiration to me. 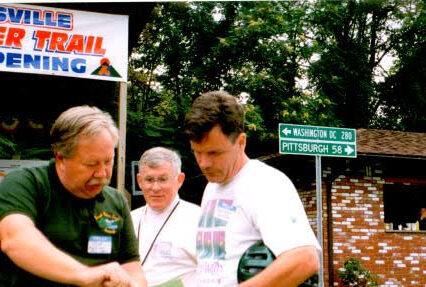 I’ll always remember Bob’s easy smile and laugh and the twinkle in his eyes that would go into slits of laughter! He was always so supportive too. He made the [Regional Trail Corporation] a better place.”

McKinley was always delighted to be involved in trail work, especially when it concerned construction and being out on the worksite. He was particularly involved in getting vehicle gates up to stop harmful ATV and car traffic from interfering with the trail.[7]These gates would sometimes be a point of contention with local property owners, with McKinley occasionally having to re-establish torn down gates himself. This hands-on 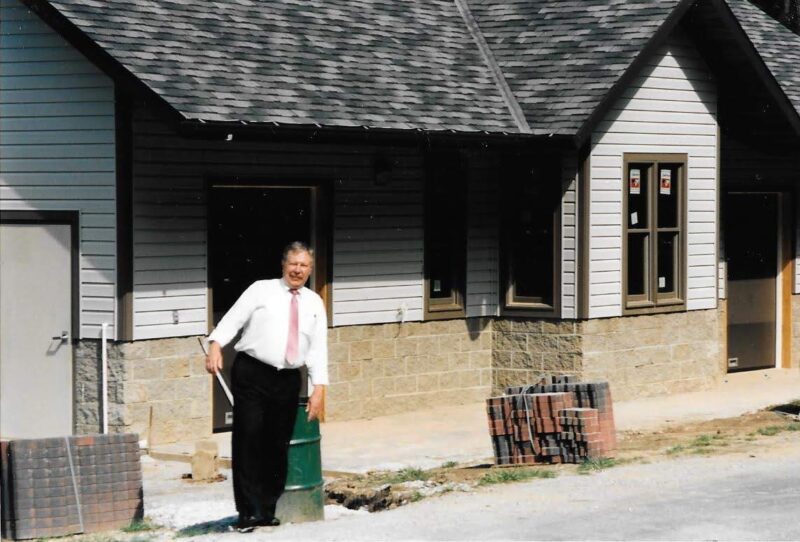 McKinley at Cedar Creek Park in Westmoreland County, Pennsylvania in 1994.

approach of being out in the field instead of the office handling administrative duties would get McKinley into trouble now and then, but his personable attitude as a trail ambassador helped bring skeptical naysayers to change their stance on trail development.[8]

“If Bob thought something needed done he didn’t mind asking you to do it!  I got along really well with Bob, he’s the type of a guy that just saw everything through rose-colored glasses and was sure that he could do it.”
-Charlie Smith, Mon-Yough Trail Council Volunteer[12]

“Bob was extremely enthusiastic. He was really good at getting everyone going and getting everyone involved. I referred to him as like the cheerleader for trails. He was all over that. He was good at getting the grants. […] [H]e really did move us forward because I think his enthusiasm and his love of this trail and the whole love the concept.”
-Malcolm Sias, October 11, 2018[9] 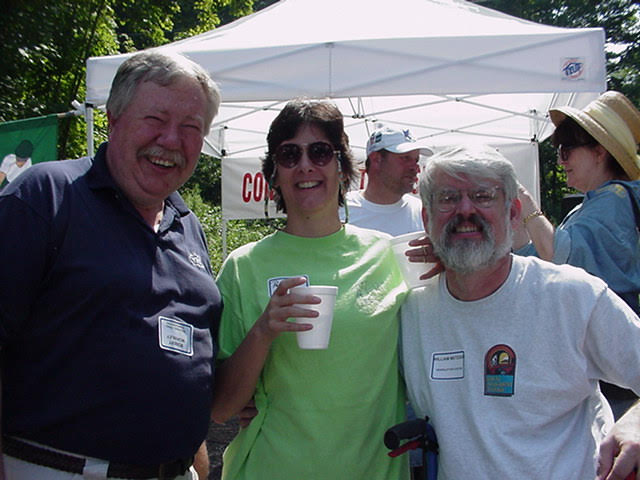 McKinley (left) with Pam & Bill Metzger at the 100-Mile  ceremony in Confluence, Pennsylvania in 2004.

McKinley also was known for his devotion to the trail project and being able to convince even the most opposed parties within the community to think differently about hosting a trail. One such property owner near the town of Whitsett proved to be a challenge, the homestead owner opposed the trail so much as to block it with fencing and weapons. 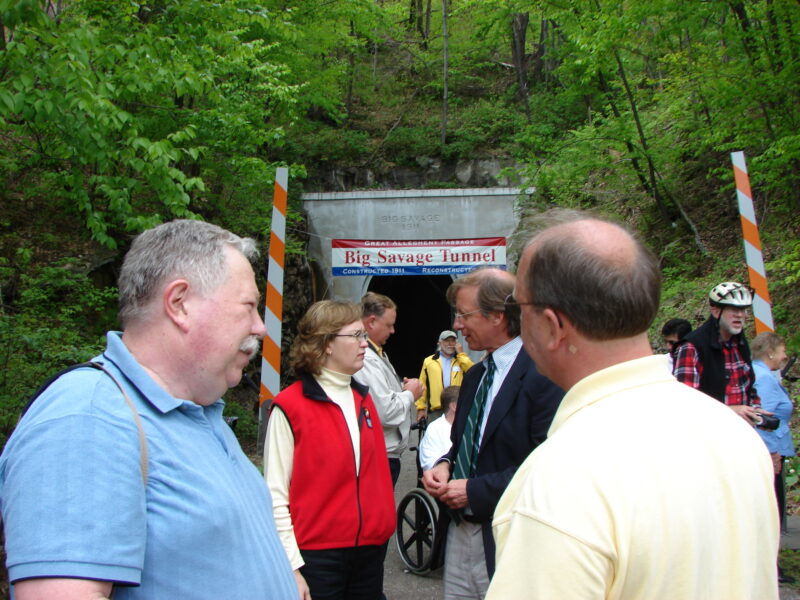 According to then Westmoreland County Parks and Recreation Planner Jack Paulik, McKinley defused what could have been particularly volatile negotiations; seemingly risking life and limb for access to the right-of-way past the conflict property.[10] A trait that most trailbuilders involved with the RTC will note that McKinley was enthusiastic to see the trail through, being a contributor to volunteer projects around the Westmoreland area and seeing them through to the end.[11]

After 12 years of service to the RTC, McKinley went to pursue other projects in 2004. His influence within RTC and the surrounding communities will be remembered gratefully in the development of the Great Allegheny Passage.