“You know, you’re telling the story but 20, 30, 40 years from now or 100 years from now when untold thousands of people will have enjoyed that trail, those trails, in the midst of even probably a more dense development around them as Pittsburgh grows and expands. It’s this remarkable story of people that sort of see these opportunities. In many ways, the most valuable parts of what we can do for our community is to give people a place to go and enjoy themselves.”
-Thomas J. Murphy, January 2006[1]

Former mayor Thomas J. Murphy led the city of Pittsburgh out of a dying age of steel mills into an era of wellness, conservation, and trail development. Murphy used his mayoral office to reshape city life around a system of trails. Until systems like the Montour Trail, Eliza Furnace Trail, and the Great Allegheny Passage (GAP) came into existence, most Pittsburgh residents did not see the potential of urban trails. Murphy, a native of Pittsburgh, served in the Pennsylvania House of Representatives from 1979 to 1993 for the 17th and the 20th districts.[2] When Murphy became a state legislator, he learned about the Rails-to-Trails Conservancy, which he claimed was “one of the purest citizen movements I’ve seen in this country.”[3] He would stay on the Conservancy’s board for 10 years, advocating in state government to allot state/federal money to trail recreation projects. In the mid-1980s, Murphy, along with Martin O’ Malley (local activist), Todd Erkel (Pittsburgh writer), and John Stevens, established Friends of the Riverfront. This nonprofit, devoted to protecting and restoring the region’s rivers, was also an effort to restructure the economic foundations of Pittsburgh as the era of steel industry within the region came to a close.[4]

“[W]hen I travel all over the country, I look for trails to go on and, you know, everyone has a story like this. It really is a remarkable grassroots effort of people who just saw the opportunity and for a wonderful recreational story. And, you know, the Rails-to-Trails Conservancy, nationally, has helped to lay the framework with the enhancement money and railbanking laws but it really is the grassroots that have created these trails all over the country.”
-Thomas J. Murphy, January 2006[5]

Murphy would continue this idea during his tenure as Pittsburgh’s Mayor, from 1994 to 2006. In 1994, with help from his cabinet staff Tom Cox and Steve Leeper, Murphy helped the Urban Redevelopment Authority (URA) buy 1,000 acres of land around Pittsburgh, including old steel mill properties along the Riverfront and the South Side.[6] This massive purchase of property did come at a cost. Murphy took $6 million dollars from the city’s operating budget to finance the project’s $16 million dollar bond issue.[7] Murphy’s goal was to acquire land along the Riverfront to build a trail and spark a renewed focus on riverside development for the city.[8] Only after the trail projects were completed did developers and various figureheads in the city realize the full potential of a trail infrastructure to the wellness of Pittsburgh. The people Murphy met walking and biking along the trails made the risky investment in the city’s riverfront worth the gamble.[9] 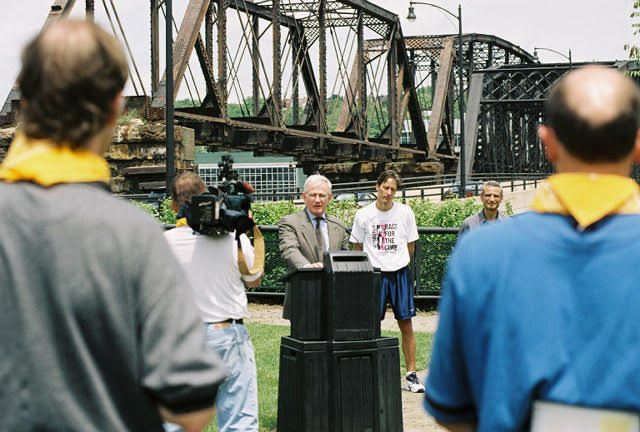 Murphy giving a speech about the Hot Metal Bridge.

Another particular project that increased the popularity of the trails was the Eliza Furnace Trail, which ran from the 9th Street Bridge to Washington’s Landing.[10] The project officially started around January of 1998, when Murphy assigned his neighborhood policy organizer Darla Cravotta to head the city’s trail development projects, starting with the Eliza Furnace Trail. Murphy, Cravotta, and their respective teams within the URA and Public Works worked tirelessly to secure proper right-of-ways, solicit bids for construction, and negotiate property accommodations with CEOs of influential Pittsburgh businesses like PNC Financial Corporation and University of Pittsburgh Medical Center (UPMC) so that an uninterrupted pedestrian trail would run along the north shore of the Monongahela riverfront. The project was completed in time to showcase it when the city hosted the 1999 International Trails and Greenway Symposium (which Murphy had encouraged Rails-to-Trails representatives to hold in Pittsburgh). Nearly 1,200 people attended the conference and witnessed Murphy’s trail-building initiatives–the system of trails running throughout the city and surrounding communities.

The jail was being built and I remember calling Tom Foerster up and saying, “You need to move the jail 50 feet. Leave a 50-foot right-of-way there.” I mean, because the jail was originally designed to be up against the highway. So, if you go back behind there you will see that there is a right-of-way. Same with PNC, I had the same conversation with Tom O’Brien. I was Mayor by then. And, that when PNC was building their operations center there and I saw the designs they had and I said, “You need to move your building over 50 feet from off the highway so we can put a trail through there.”
-Thomas J. Murphy, January 2006 [11]

Murphy’s efforts to create an urban trail system paralleled the development of the Great Allegheny Passage, which was already underway south of Pittsburgh, from McKeesport to Connellsville, with routes being planned to link up with trailbuilders from Maryland.  Murphy used his position as mayor to provide aid to the GAP and its trailbuilders, and he and his office were vital in providing (or setting the groundwork) for land acquisitions and easements. Murphy also had a hand in the development of the Golden Triangle in downtown Pittsburgh, and through the Riverlife Task Force he helped initiate the construction of a ramp from the Mon Wharf property to the GAP.  Without Murphy’s continued endorsement of trailbuilding, the GAP Trail would not have been a cornerstone of Pittsburgh’s riverfront development nor provided immense benefit to Pittsburgh’s citizens. 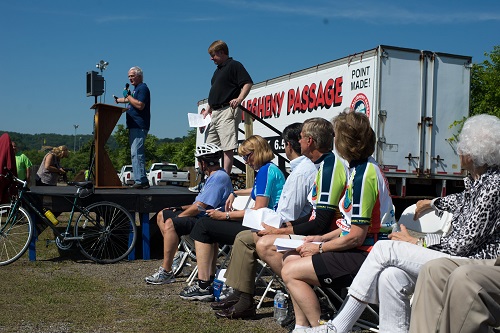 Murphy (at podium) speaking at the Point Made! ceremony in Pittsburgh in June of 2013.