“Probably 99% of that [state capital budget] money never gets released. It’s a lot of money, but people put projects in knowing they’ll never get funded. [To access that money] you have to understand politics and how it’s done.”
-Richard Geist, June 17, 2019[1] 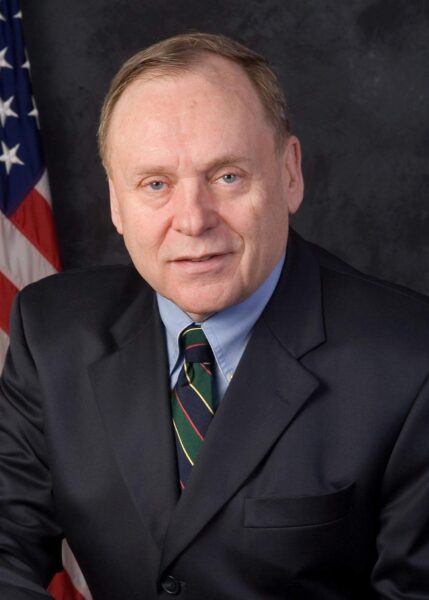 Former Pennsylvania State Representative Richard “Rick” Geist lent his support to the Allegheny Trail Alliance (ATA) and their initiative to develop the Great Allegheny Passage (GAP) after only a 15-minute meeting with ATA President Linda M. Boxx and Friends of the Riverfront representative Rick Malmstrom on April 7, 1997.[2] Representative Geist saw potential in the project the ATA was developing and strived to lend his political support to the GAP whenever he could. 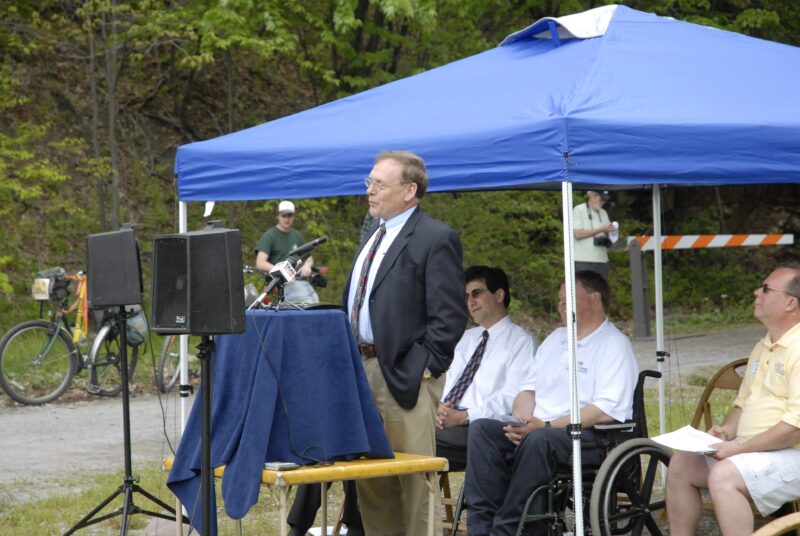 Geist speaking at the Big Savage Tunnel dedication ceremony in 2006.

Geist started his political career in 1978. He was recruited by Pennsylvanians for Effective Government and asked to run for a seat in the Pennsylvania State House of Representatives.[3] Geist originally had no desire to campaign for office, but he was elected to represent the 79th District, covering Altoona and the surrounding area, his first time running and was sworn on January 2nd, 1979.[4] Geist served until 2012, a total of 17 terms.[5] Because Geist had worked for EADS Group[6] in Altoona, Pennsylvania; he was asked to serve on the House Transportation Committee due to his experience as a consultant in the railroad industry. His position on the committee allowed Geist to write the budgets for transportation-related projects, including bicycle trails, which would then go to the floor of the legislature for a vote on how federal or state funds would be distributed.[7]  Geist secured the transportation chairmanship in 1993.[8]

Geist heard about the Pittsburgh to Cumberland trail project for the first time in 1997, when Geist met Linda Boxx in his office on April 7th.

“I’ll never forget it…I remember that [Linda Boxx] made an appointment to come and see me. But, what she didn’t know was that we had a huge common interest [in trails]. And, she needed some money and appropriations badly. And she came in and introduced herself, talking to me about that. I said, ‘Okay.’ I said, ‘I know what you need.’ She said, ‘Yep.’ I said, ‘Okay, it’s done.’”
-Richard Geist, June 17, 2019[9]

Geist added a $10 million line item to the state capital budget for general trail development for the ATA and a $6 million line item specifically for the Big Savage Tunnel costs.[10] In 1997, the trail project at had not yet been named the Great Allegheny Passage. So when Boxx received a follow-up call from Geist’s staff asking what the line item for the trail should be called, things got political:

“[Rep. Rick Geist] calls one of his staff people down and he said, ‘Okay, we need two line items for the state capital budget.’ And, he said, ‘So, what’s the name of your trail?’ I go, ‘Well, we don’t have a name of the trail. Well, we call it the Pittsburgh to Cumberland Trail.’ He goes, ‘Well, we can’t use ‘Pittsburgh.’ We cannot have the word ‘Pittsburgh’ in this line item.’ […] ‘If we put the word ‘Pittsburgh’ in there, it’ll be taken out of the capital budget.’”

Not mentioning Pittsburgh in the title of the budget was done on purpose, because then-Representative Tom Murphy had ruffled some feathers within the state legislature. Despite this minor setback, Boxx found a solution:

“So, I said, “Well, let’s call it the C&O Canal Extension.” So, [the trail] was in [the state budget], in two ways – two separate line items. There was a $6 million line item for Big Savage Tunnel, and then a $10 million line item for the C&O Canal Extension. And, it was under the community reinvestment part of it, which was a 50/50 match – that the municipality would have had to apply for. And, it was also duplicated under the DCNR’s [Department of Conservation and Natural Resources] budget, which would be 100% money because that’s capital improvements for the various departments. So, we get in the car, head back to Pittsburgh area, and I’m thinking I have $16 million in my pocket.”[11] 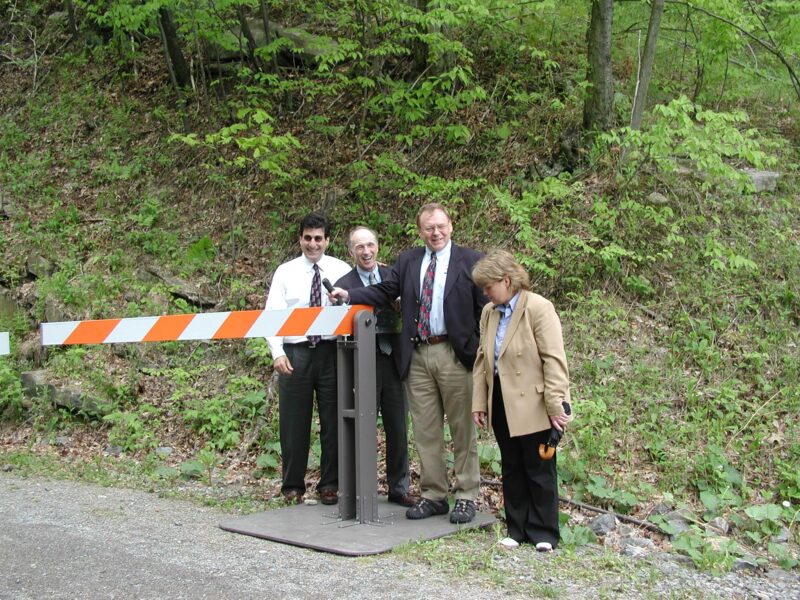 Geist (second in from right), ready to lift the safety gate outside the Big Savage Tunnel at the BST dedication ceremony in 2006.

Unfortunately, this was not the case. The line items had to be released by the State Treasurer and Governor Tom Ridge.[12] Most budget line items that go through the state government have a slim chance of being funded.[13] It also helped that Geist was an engaged supporter of the project.[14] Knowing how to move through these intricacies in state politics helped the ATA receive $10 million out of the $16 million that was put as a line order.[15]

Another of Geist’s funding contributions was securing $4.3 million dollars in 1998 through the Transportation Enhancement Advisory Committee (TEAC) which came from the Transportation Equity Act for the 21st Century (TEA-21).[16] TEAC acted as a mechanism to get projects of statewide significance approved and funded more easily.[17] Because Geist had a shared interest in cycling, multi-modal transportation, and the enrichment of transportation through trail systems, the GAP now stands as a testament to what can be accomplished through partnerships and political cooperation.

Our deepest gratitude to Rick Geist for his unwavering support for the Great Allegheny Passage.

OF THE HOUSE OF REPRESENTATIVES,” Pennsylvania House of Representatives, https://www.house.state.pa.us/rules.cfm

[12]  Rick Geist Transcript: “Rick Geist Interview_AO,” 3-4. *This was primarily done as an anti-corruption measure, to make sure all administrative chairs that deal with state funding know what is being approved from the state committees within the House.