“Jim Linaberger came from industry and he was the- he did a lot of the political work for the gas company he worked for. So, he knew all the politicians, and a lot of the movers and shakers in Pittsburgh. He knew many, many more people than I knew. And so, we made a really good team. We really did. I learned a lot from Jim.”
-Linda M. Boxx, September 15, 2019[1] 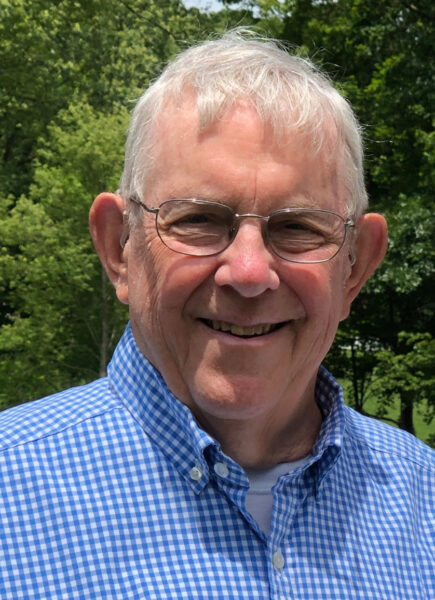 Jim Linaberger was a major contributor to the funding success of the 43-mile segment of the Yough River Trail North as part of the Great Allegheny Passage (GAP) because of his extensive experience in business and philanthropy. Linaberger worked for The Peoples Natural Gas Company as the assistant to the president and lead lobbyist for the Western Pennsylvania region.[2] Linaberger’s job was to help develop communities for the benefit of Peoples Gas, because bigger and thriving communities meant more need for energy. Most of the company’s grants thus focused on economic or recreational investments.[3]

The Yough River Trail North, which would eventually become part of the Great Allegheny Passage, caught Linaberger’s attention because of his love for biking.[4] He joined the Regional Trail Corporation (RTC) board in January of 1994, around the same time that Linda M. Boxx, head of the Katherine Mabis McKenna Foundation, joined the board.[5] Linaberger and Boxx became a solid fundraising team. They pooled their knowledge of how grants and foundations operated to sell funders on the value of the trail.[6] According to Linaberger, Linda Boxx would sell the idea of the trail to donors and trail users alike while he used his connections and grant experience to collect as much money as they could.

“I arranged for Ron [Wertz, Hillman Foundation] to come out and do a site visit. […] There were the four of us – Ron Wertz, Bob [McKinley], and Jack Cusick. Bob McKinley had a beat-up decrepit Geo Tracker. And, the top was down. So, there were four of us riding in this and we probably rode down the trail – the actual trail – because we could show him much quicker, instead of riding on bikes. And, you can’t really talk a lot – four of us couldn’t talk. But, riding in Bob’s Geo with the roof down, we must have traveled for about a half an hour, 45 minutes on the trail. And, we came back to the parking lot. And, being a former salesman at Peoples Gas, I wanted to try to get a feel as if Ron was a customer – which he was – about whether he would be interested in us putting together a proposal and submitting it to him to develop a trail. And, Ron quickly said yes. My next question was – and this the shocker – I said, ‘How much should we ask for?’ Now, I was thinking maybe $10,000. And, Ron, without batting an eye said, ‘$100,000.’ Now, I wasn’t too surprised because I knew how big the Hillman Foundation was, but Jack Cusick and Bob McKinley almost fell over. We’d never gotten anything like that.”
-Jim Linaberger, October 21, 2018[7] 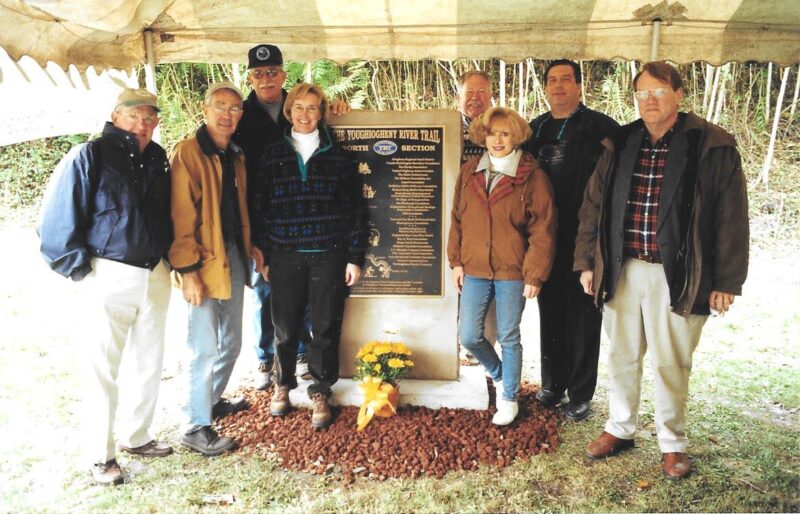 While on the RTC board, Linaberger and Boxx raised close to $500,000 dollars in grants from corporate foundations.[8] The main objective in the early 1990s was to develop the Yough River Trail North from Boston to Connellsville. Often Linaberger would arrange trail visits with larger donors. Showing donors the potential of the trail helped Linaberger and Boxx raise the money needed for the major infrastructure projects in Somerset County and Pittsburgh.

Coincidentally, Linaberger had a connection that aided the Allegheny Trail Alliance (ATA) in their efforts to rehabilitate Somerset County’s Big Savage Tunnel.[9] To complete the reconstruction, the ATA needed to raise $12.5 million dollars.[10] For a nonprofit, this amount seemed almost insurmountable. However, Linaberger had a connection to Governor Tom Ridge through his daughter.[11] His daughter was the Deputy Director of Operations for Governor Ridge, and she set up a meeting for Linaberger and Boxx with Ridge’s Chief of Staff, Mark Holman,[12] giving them an opportunity to ask the governor to release the state capital budget funding that included money for the reconstruction of Big Savage Tunnel (which PA Representative Rick Geist helped the ATA secure).[13] Ridge approved a $16 million dollar line item for recreational programs, of which Linaberger and Boxx secured $4.5 million for the ATA.[14] 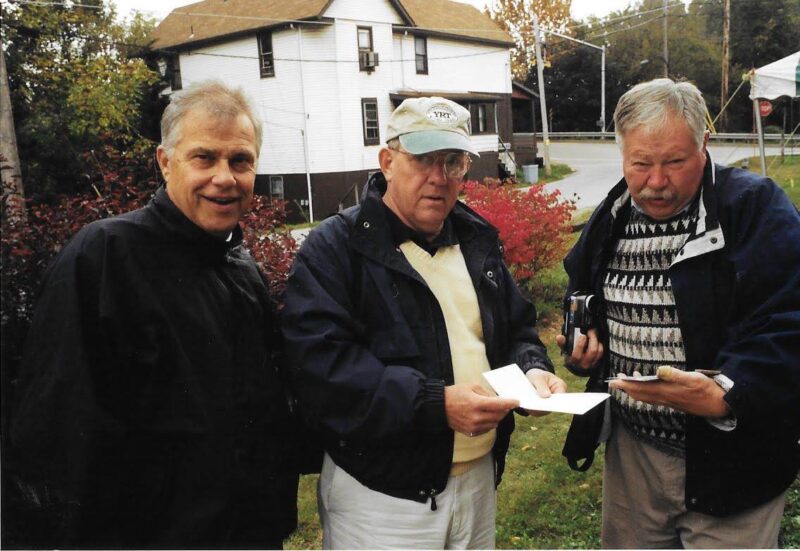 Linaberger also encouraged the trail groups within RTC that were working on the GAP to apply for an Allegheny Regional Asset District (RAD) grant.[15] Linaberger advised the chapters to apply as the RTC rather than as individual, competing chapters, believing they would be more likely to win in hopes of achieving better results in acquiring RAD funding as a group.[16] The strategy was successful, and the RAD grant awarded by Allegheny County provided the RTC with funding for construction of the GAP between McKeesport and Connellsville as well as for trail maintenance and upkeep costs for the RTC’s section of the GAP between these two trail towns.

“The RAD was a very important organization for trails. And, there again, each of the individual trail organizations [within RTC] were going into RAD to get funding. And, I was one of the ones that spearheaded us to do it as a group. […] I kind of pushed each of the trail organizations for us to try to approach the RAD, as a group, that [RTC] would be more likely to get funding than if each of us went in and were competing against each other. […] The various trail organizations would meet to make our plans for what we were going to ask the RAD for the coming year. […] We did some horse trading among ourselves instead each of us all going in separately. And, I think we were successful in almost always getting the money that we asked for.”
-Jim Linaberger, October 21, 2017[17]

Linaberger’s involvement with RTC would extend from January 1994 to December 31, 2008.[18] For Linaberger, the funding he helped raise was nothing without the passionate trailbuilders from the RTC to the ATA who drove the project forward.[19] Although every contributor, from state and federal departments to private grant donors, helped to make the Great Allegheny Passage possible, Jim Linaberger’s guidance and grant prowess heavily influenced the private fundraising that was essential to completing the GAP. 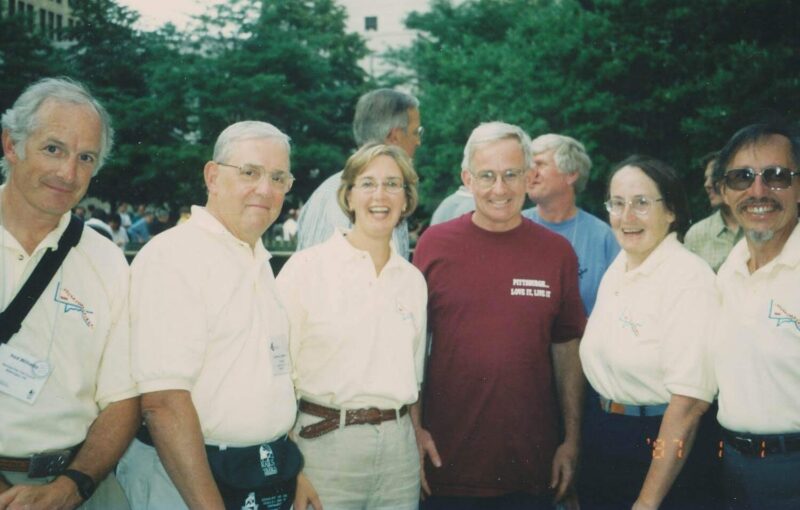 Linaberger (second from left) with other trailbuilders at an International Greenways Conference.

[12] Jim Linaberger, Transcript: “2018-10-21 Jim Linaberger_Final.pdf,” 23. *Note that there is an error in the transcript, which is corrected here. Mark Holman is correct, not Coleman.

[15] RAD is an “area-wide unit of local government” that was approved by the Pennsylvania State Legislature in 1993. “What Is RAD?,” Rad Works Here (Allegheny Regional Asset District), accessed December 11th, 2019, https://www.radworkshere.org/pages/what-is-rad