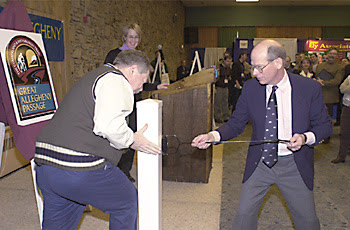 Rail trail groups formed all along the corridor and it became apparent that a continuous trail was possible from Pittsburgh to Cumberland to Washington, DC. A Trail Summit was held in September, 1995. The consensus of the Summit was that the contiguous trail organizations should unite and the Allegheny Trail Alliance was born.

In 2001, the trail was christened the Great Allegheny Passage with its own logo, and later in the year 100 continuous miles were opened from Meyersdale to McKeesport.

It’ Official – Our trail’s Name is the Great Allegheny Passage! and then,  Branding the GAP logo.

2021 marks the 20th Anniversary of naming the Great Allegheny Passage. My, how time fly’s!